The history of bread is an important one since it basically played the greatest roll in the development of society as we know it.

It all started about 10,000 years ago as the ice age receded. Plants started to grow and the early men knew that collecting seeds would add great value to supplement eating meat. The collecting of seeds was a job for the woman and girls of the tribes (This is important going forward in history). 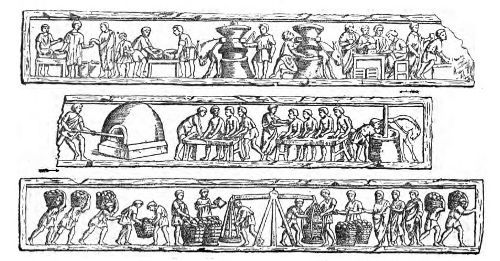 2,000 years later signs of agriculture started appearing when the woman realized that they can grow some of the seeds previously collected. They figured out that if you don’t eat the best seeds you can manipulate the crop and doing this over time you can produce better yields. Signs of much bigger than wild grains were found in caves populated by people from this period in the Middle Eastern fertile crescent. The domestication of plants and agriculture also lead to the growth of religion.

Bread as we know it and the use of levain only came to use during the time that the pyramids were built, 2500BC. At this time people consumed a slurry of ground wheat and water and even though it is unclear someone must have left their slurry out a bit too long. Wild yeast and bacteria populated the slurry and formed a simple sourdough. The Egyptians must have liked the taste of this fluffy and slightly sour alternative since bread cones on which bread was baked is the most common artifact found on archeological sites around the pyramids.

By the time bread reached Roman times (27BC) it became so important that the Roman government handed out 75 pounds of wheat to every family on a monthly basis.

“Give them bread and circuses and they will never revolt” – Juvenal

Entertainment and affordable food were the secrets of the Roman successes and they had their supply chain pretty close to perfect. They received grains from their territories in North Africa for the one half of the year when the alternative season was supplied by territories in the east of Europe. Grain and bread were so important that their Northern boundary (Hadrian’s Wall) is also seen is the furthest north area that you can feasibly grow wheat. Further north you will find Rye and Oats as primary crops.

The middle ages saw a turnaround for bread. Serve were responsible for growing and harvesting wheat but had to pay most of their crop or profits to the lords and ladies who owned the land. People were poor and milling as well as baking were controlled by lords and ladies who employed millers and bakers. People were literally having a hard time feeding themselves and their families.

By the 1730’s the price of bread finally became too high. Women could not feed their families and finally took to the streets and marched to Versailles. They extracted the Queen and King (Queen Marie Antoinette) and finally executed them. At this point, it appears like the Romans were right.

Through all the years people still did not understand what actually happens during the bread baking process. In the 1674 Microscope maker, Anton Van Leeuwenhoek was the first to see and describe bacteria, yeast plants, the teeming life in a drop of water (such as algae), and the circulation of blood corpuscles in capillaries. The word “bacteria” didn’t exist yet, so he called these microscopic living organisms “animalcules.”

The industrial revolution in London was the next big breakthrough. Every industry got mechanized and adults and children were put to work to keep machines going 24hours a day. No one had time to bake anymore and affordable food sources were in high demand. This lead to the automation of the bread baking process and the development of the continues oven. Yeast became fast and reliable and the Saccharomyces cerevisiae, originally found in beer foam of the time gets developed to the dried yeast strain we are used to today.

Bread became fast but also tasteless to the point where companies like the Aerated Bread Company (ABC) start using additives to enhance the flavor and shelf life of bread. The Aerated Bread company also developed the ABC Tea Rooms as a way to allow the woman and young girls to be allowed outside their home without a male counterpart – the early tea parties and cucumber sandwiches are from these Tea Rooms.

The Chorleywood bread process (CBP) is a process of making dough in bread production. The process was developed in 1961 by the British Baking Industries Research Association based at Chorleywood in Hertfordshire, and by 2009 was used to make 80% of the United Kingdom’s bread.[1] Compared to the older bulk fermentation process, the CBP is able to use lower-protein wheat and produces bread in a shorter time. This involved using enzymes, extenders, and retarders.

Today commercial breads use up to 40 additives in the US or locally and in the UK typically about 20+. If you compare this to a traditional bread that uses only 4 ingredients (Flour, Salt, Yeast, and Water) it is easy to see why people are developing health issues.

Post Tagged with History of Bread
Comments are closed.